Lost in Space – Bitcoin and the Halving

The first quarter of 2020 was quite the wild ride. From the Iranian missile crisis, impeachment of the US President, the splintering of OPEC, a liquidity crisis in financial markets and the global spread of COVID-19, there has been no shortage of news to drive fear, uncertainty and doubt in global markets. In the realm of cryptocurrencies, markets kicked off the year with a boom – rising 58% over January and February before ultimately collapsing 63% from the highs to the lows, a collapse in which the majority of the drawdown occurred in a span of less than 24 hours. There is no shortage of macro outlooks covering the global economy and cryptocurrencies in general. Rather than joining the chorus of predictions about what happens next, we find it more prudent to explore the major narrative that has dominated the cryptocurrency markets over the last 12 months — the Bitcoin halving which is now just over a month away.

Narratives are rarely successful predictors of what will occur. At Strix Leviathan, we prefer to think about a variety of potential outcomes and a more useful exercise than playing the future-guessing game is dissecting the dominant narratives for potential flaws or avenues of failure.

The Bull In The Room

It is hard to escape the bullish pandemonium regarding the Bitcoin halving narrative. The bull-case is everywhere so I won’t reiterate here, but long-story shortened, the cryptocurrency industry holds high expectations that a significant bull-run is on the horizon. Since Bitcoin’s halving reduces rewards paid to miners for their work securing the blockchain, then naturally it follows that a subsequent reduction of sell-side pressure must facilitate a dramatic escalation in price. This narrative is partly egged on by the widely-shared Stock-To-Flow model but long-eyed as a fundamentally bullish event. I plan to cover the flaws of utilizing simple econometric models to conduct long-run statistical forecasts of asset prices in a future write-up. (available here)

Here, I will focus instead on the two key assumptions necessary for the halving narrative to result in a positive economic impact.

Assumption 1 – Miners have been selling all, or a significant portion, of their mined BTC every month in order to fund operations. Therefore cutting their rewards will reduce sell side pressure.

Reality – Not all miner rewards are sold. A meaningful amount of mined BTC is sitting on balance sheets as miners both speculate and utilize BTC-collateralized loans to run and expand operations. The impact of a supply-side cut on price is uncertain at best and minimal at worst.

Assumption 2 – Market participants do not anticipate or “price in” the supply reduction and as a result, do not impact the supply-side shift before the halving event.

Reality – Bitcoin’s supply schedule is the major selling point by crypto-evangelists and arguably the only selling point that has any value. Market participants have been anticipating this halving and all future halvings since 2009 when there was only one participant.

Previous research Strix Leviathan conducted suggests that the impact of halving events are indiscernible from broader market sentiment and that may be true here again.

Pricing in the Future

A great deal of intellectual thought has gone into debating whether the impact of the halving is already “priced in.” A concept stemming from Eugene Fama’s Efficient Market Hypothesis that states financial markets act as conduits for price discovery and as such all available information is reflected in asset prices.

Financial history in general, and the short history of cryptocurrencies alone, should cast doubt on the idea that markets are efficient mechanisms for pricing assets. However, lack of efficiency is not for lack of trying. Market participants do indeed try to price the future; anyone who has ever purchased Bitcoin because of its scarcity is “pricing in” this halving and all future halvings. The “priced in” debate is erroneous, the real question is how accurate are those attempts at pricing the future?

Given that the price of Bitcoin is a function of beliefs and beliefs under uncertainty are constantly shifting, it’s safe to conclude most attempts at pricing Bitcoin’s future are way off mark. Whether Bitcoin should be $10,000 right now or $1,000, I cannot say but its future is much more uncertain than many seem willing to admit. After all it would be a dark winter indeed for cryptocurrency enthusiasts if the flagship experiment failed. Consider the following short set of questions and then ask yourself if current prices properly account for the uncertainty:

I ask these questions not because I know the answer but because they are legitimate questions that nobody knows the answer to. Depending on how one answers these questions, among other outcomes, then one could conclude Bitcoin will be $100,000 or $0. This tells us that the future of Bitcoin is as uncertain today as it was 5 years ago and claims to the contrary represent an adherence to a doctrine of thought more than a practical outlook on the uncertainty the future holds.

The role of Bitcoin and cryptocurrencies in general will be discovered over the coming decades, not years, but we close out Q1 of 2020 with Bitcoin failing its first real test of the dominant narrative that it is the new safe haven asset — when the global economy spiraled into a frenzy, the world did not rush to hard-money alternatives, the world flocked to the U.S. dollar.

What is Old is New Again

Despite failing its first test, there will be many more opportunities for Bitcoin and the asset class in general. While the technology underpinning them may be novel and represent a fascinating concept to re-write some of the fundamental trust relationships that underpin the global framework, the behavior driving price is much less novel. The speculative response by investors has been, and will continue to be, much the same as the speculative response to past innovation. 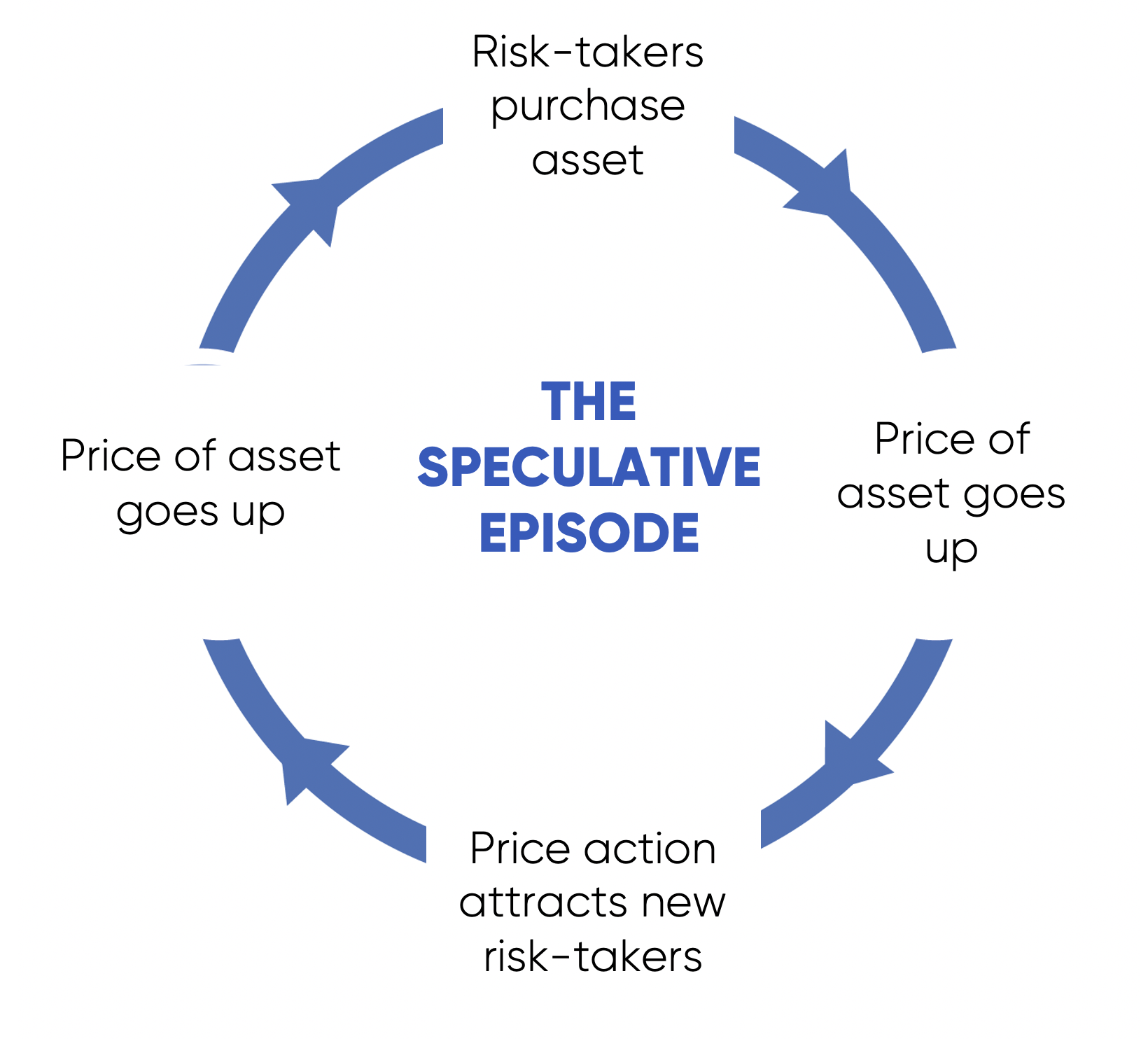 Note how the speculative episode is related to the behavioral phenomena referred to as reflexivity, a behavior that we at Strix Leviathan hold largely drives cryptocurrency price action. The issue with speculative episodes is that they must end and always do. Nothing goes up and to the right forever. At some point marginal buyers decrease to the point where price levels are no longer sustainable and the episode unwinds. It is difficult to look at cryptocurrencies over the last 3+ years without concluding that we are in the midst of the great speculative episode of 2017 continuing to unravel.

The economic impact of the halving is questionable at best and negligible at worst but it is not the halving that will reverse the tide. Market participants were already heavily long and not just long, but highly levered long from the derivatives markets down to the balance sheets of cryptocurrency entities.

The market needs new capital, new risk-takers, and likely new narratives to fully kick off another speculative episode. If the halving does indeed have an impact it will be in the form of luring new capital to the space under the guise of a fundamentally bullish set-up. Whether that is true or not is irrelevant.

Thus far, this discussion may seem very bearish. However, the simultaneous belief that Bitcoin could be $100,000 or $0 creates substantial opportunity to compound capital at returns that are no longer achievable in other asset classes. There is also real innovation occurring outside the realm of Bitcoin as well. A whole asset class of digital commodities for a digital world has emerged and brings with it economic systems operating outside the bounds of the traditional economy save for capital flows between the two.

The technology may be inefficient and real adoption may be paltry but the asset class represents a going-concern if you believe demand across the globe for digitally scarce, censorship resistant, sovereign, and distributed applications will continue to grow. The digital currencies that power these micro-economies are liquid (enough), volatile, and reflexive in nature. They are the equivalent of listing angel-investment shares on an exchange and allowing markets to bet on future outcomes. Such a proposition is inherently volatile and subject to speculative episodes. We may not be able to say when but we are confident saying there will be plenty more 2017-style bull markets and 2018-style bear markets to come as narratives about future outcomes ebb and flow.

If the goal is to compound capital at a higher than market rate, the asymmetric nature of losses during speculative episodes requires prioritization of capital preservation first and foremost and gains second.

However, benefitting from this paradigm requires active management and not blind faith in one specific outcome. I pause here to recognize the obvious bias of an active manager declaring that investment in cryptocurrency requires active management. However, there is a real reason for this to be true. If the goal is to compound capital at a higher than market rate, the asymmetric nature of losses during speculative episodes requires prioritization of capital preservation first and foremost and gains second. This is not attainable with passive exposure. Passive investments may make sense when your curve is up, to the right, and backed by a global economic power, ala U.S. equities, but taking passive long-term positions in an experimental and early stage asset class is inherently much less attractive. Doing so leaves one’s investment subject to the whims and beliefs of the crowd while surrendering returns to the randomness of luck.

Strix Leviathan operates a systematic investment approach by taking long and short directional positions in the cryptocurrency markets. The system includes a variety of risk-on/risk-off models including algorithmic momentum, trend-following, and pairs trading.